These are pages from the latest deco book I have been working on (November 2005).
Posted by Julie Stenning at 21:14 0 comments

I wanted to use this image of a cat I drew some time ago. In our family, it is called "The Ashton Cat" although for purposes of this, it has turned into "Growltiger". My husband (Paul) nicknamed the Ashton cat because he said it reminded him of my brothers' and my impishness. 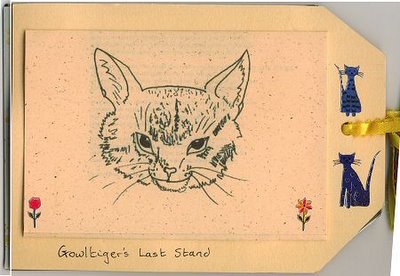 When you open up the page, you see T.S. Eliot's poem "Growltiger's Last Stand". 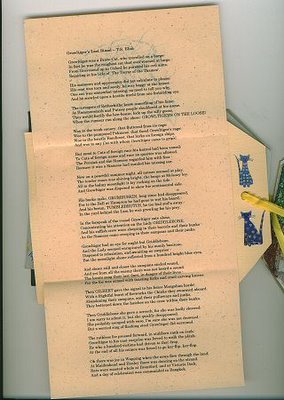 Growltiger was a Bravo Cat, who travelled on a barge:
In fact he was the roughtest cat that ever roamed at large.
From Gravesend up to Oxford he pursued his evil aims,
Rejoicing in his title of `The Terror of the Thames'.

His manners and appearance did not calculate to please;
His coat was torn and seedz, he was baggy at the knees;
One ear was somewhat missing, no need to tell you why,
And he scowled upon a hostile world from one forbidding eye.

The cottagers of Rotherhithe knewsomething of his fame;
At Hammersmith and Putney people shuddered at his name.
They would fortity the hen-house, lock up the silly goose,
When the rumour ran along the shore: GROWLTIGER'S ON THE LOOSE!

Woe to the weak canary, that fluttered from its cage;
Woe to the pampered Pekinese, that faced Growltiger's rage;
Woe to the bristly Bandicoot, that lurks on foreign ships,
And woe to any Cat with whom Growltiger came to grips!

But most to Cats of foreign race his hatred had been vowed;
To Cats of foreign name and race no quarter was allowed.
The Persian and the Siamese regarded him with fear -
Because it was a Siamese had maulted his missing ear.

Now on a peaceful summer night, all nature seemed at play,
The tender moon was shining bright, the barge at Molesey lay.
All in the balmy moonlight it lay rocking on the tide -
And Growltiger was disposed to show his sentimental side.

His bucko mate, GRUMBUSKIN, long since had disappeared,
For to the Bell at Hampton he had gone to wet his beard;
And his bosun, TUMBLEBRUTUS, he too had stol'n away -
In the yard behind the Lion he was prowling for his prey.

In the forepeak of the vessel Growltiger sate alone,
Concentrating his attention on the Lady GRIDDLEBONE.
And his raffish crew were sleeping in their barrels and their bunks -
As the Siamese came creeping in their sampans and their junks.

Growltiger hd no eye for aught but Griddlebone,
And the Lady seemed enraptured by his manly baritone,
Disposed to relaxation, and awaiting no surprise -
But the moonlight shone reflected from a hundred bright blue eyes.

And closer still and closer the sampans circled round,
And yet from all the enemy there was not heard a sound.
The lovers sang their last duet, in danger of their lives -
For the foe was armed wit htoasting forks and cruel carving knives.

Then GILBERT gave the signal to his fierce Mongolian horde;
With a frightful burst of fireworks the Chinks they swarmed aboard.
Abandoning their sampans, and their pullaways and junks,
They battened down the hatches on the crew within their bunks.

Then Griddlebone she gave a screech, for she was badly skeered;
I am sorry to admit it, but she quickly disappeared.
She probably escaped with ease, I'm sure she was not drowned -
But a serried ring of flashing steel Growltiger did surround.

The ruthless foe pressed forward, in stubborn rank on rank;
Growltiger to his vast surprise was forced to walk the plank.
He who a hundred victims had driven to that drop,
At the end of all his crimes was forced to go ker-flip, ker-flop.

Oh there was joy in Wapping when the news flewthrough the land;
At Maidenhead and Henley there was dancing on the strand.
Rats were roasted whole at Brentford, and at Victoria Dock,
And a day of celebration was commanded in Bangkok.

Posted by Julie Stenning at 21:09 0 comments

I have recently (November 2005) taken an machine embroidery course. This was the influence for this page. 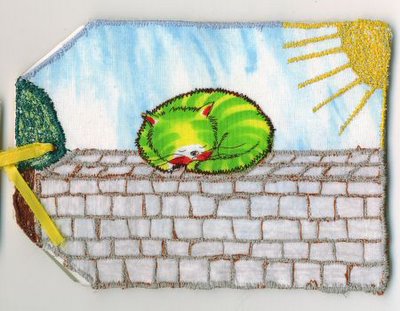 I had a few technical problems. The background material (sky and grey for the wall) was ironed onto curtain stiffener using bond a web. When the stitching was finished, it was curling badly. I then glued it to a page in the book and the wet glue made the page wrinkle. Problems were resolved though, flattening the page under a pile of books solved the curl and I attached a piece of card onto the back which hid the unsightly page bubbles. I much prefer dry glues to wet ones!
Posted by Julie Stenning at 21:03 0 comments