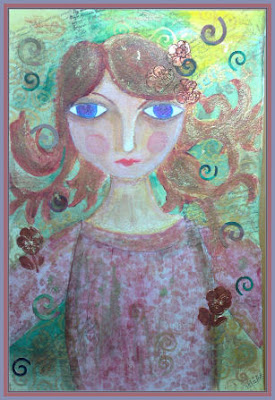 Although I lit the picture using a daylight bulb, the colours are wrong in the photo. The picture in real life is a lot pinker and yellower.

I'm going to do another Petite Doll when my birch plywood has arrived.
Posted by Julie Stenning at 15:53 2 comments

I'm currently taking Suzi Blu's Les Petite Dolls workshop. She shows you how to paint cute people. I have been struggling with painting/drawing for years now and I am, through her guidance, being able to create pictures that I am reasonably pleased with. Here is the link to her site http://suziblu.ning.com/.

This was an exercise in shading: 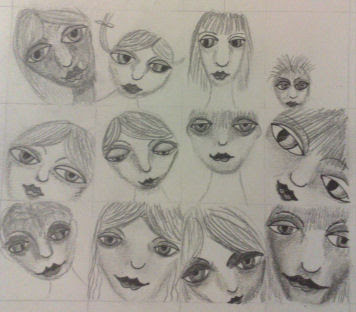 And this was my first attempt. It was too yellow and I hadn't done enough layers. We were at lesson 4 by this time. 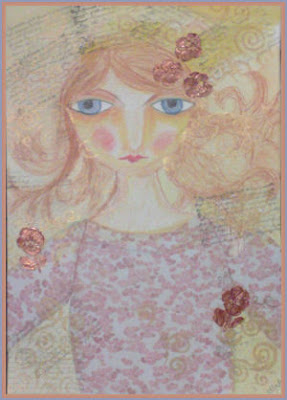 And this has had more painting done to it. It looks a lot better. 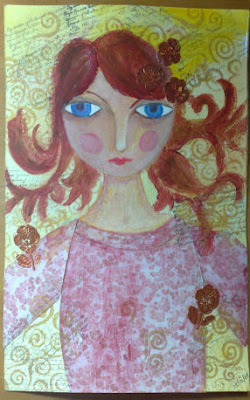 Posted by Julie Stenning at 07:59 1 comments

A New Toy for the New Year

I treated myself to a TomTom just before Christmas and it arrived yesterday. We got to play with it on a trip to Bristol for a New Year's party. I works very well. It got me to our friend's house and I can never find this particular one by myself.

The one I purchased was from Morgan Computers here in the U.K. They specialise in refurbished stock and it was very reasonably priced, and looks brand new.

Hopefully there won't be later blog posts which say I have driven into a pond because my Tom Tom told me to!

Posted by Julie Stenning at 18:13 0 comments

Have a look at www.imdb.com for a synopsis.

Posted by Julie Stenning at 18:12 1 comments

I've just been watching a program presented by Adam Hart-Davies about how London was built. He showed some paper making, explaining that hand made paper was expensive and a slow process which made printing very expensive. Printing started in the U.K. in the 1500s.

He created a water mark by having stitching on the screen which was used to make the paper. What he also did, was use a sponge to absorb excess water and to cojoin the fibres after he had put the mould onto the blanket (can't remember the proper terms for either the mould or the blanket). I must try both of these one day.

Posted by Julie Stenning at 18:11 0 comments

I originally created this post on my website in April 2008. I have decided to replace my website with a blog and am moving some of the posts.

I have recently created my first doll. My mum and I went to a workshop in Bristol. The first one was on the first Saturday in March and we created the dol, started stuffing it and joining up the limbs. For homework we had to finish the stuffing and joining. We also had to paint the body.

The final workshop was on the last Saturday in March when we sculpted the face and clothed the doll. I finished mine off at home.

Posted by Julie Stenning at 18:09 0 comments

I originally wrote this post on my web site in June 2008. I have decided to replace my website with a blog and I am rewriting some of the web site posts.

Today is a PB day. I decided to eat in the Chinese restaurant, a few doors down from the hotel. I had gorgeous spicy thai king prawns, and whilst waiting for the sweet menu, was given a leaflet by one of the staff. It was advertising tickets for a meal next Tuesday to collect money for the earthquake appeal in China. I explained that I was a visitor and wouldn't be able to come on Tuesday, but that I would like to make a donation. He was overwhelmed. We decided that my donation would buy 3 tickets with a little left over. He wanted to take just the money for the tickets, but I persuaded him to take the rest. I reckon they will make for the appeal if people don't buy tickets, but he has given me three and we have decided that I should give them to people in the PB office. Now, three is an awkward number, so I haven't decided who is going to benefit.

We had a bit of a chat, he doesn't have relatives in China who are affected, but I suppose feels the country's pain.

Then dessert - a chocolate parfait. Chocolate source. surrounded by green mint ice cream covered in a hard chocolate coating, yummy. The manager insisted on giving me the dessert on the house, even though I had explained that it was a company bill.

When I left, he gave me a big hug. I shall be going back there again!

Posted by Julie Stenning at 18:06 0 comments 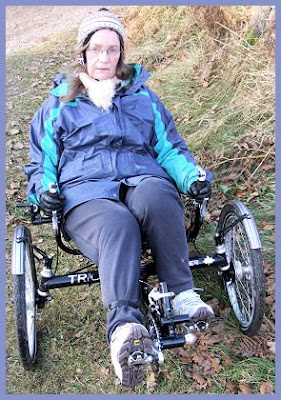 They are slower going up hills than a bike and faster going down, however, you can stop half way up a hill and get started again very easily.

The only disadvantage I have found is that your legs get very cold and my big toes go numb. I also have cleated shoes and I find them tricky to fit on the pedals.

We went on my third trip this morning, about 5 miles which took an hour. I had to have a hot bath when I got home but I did feel a lot better for it.
Posted by Julie Stenning at 17:53 0 comments