Trying out the ad free version of blogger droid

This is the first time I have spent any swedish kroner. The internet makes it so (too?) easy. I have been reading lots of swedish books recently and I do fancy visiting one day. Camilla Lackberg is the latest along with Henning Mankell.

I spent kroner because I bought the ad free version of blogger droid to send blog posts from my phone. It works a treat and I hope that Anders Hedstrom is making a mint.
Posted by Julie Stenning at 22:12 2 comments

I have an android phone. I was asked the other day if I liked the slidey way of entering text. I thought I had tried it out before and didn't use it, so I tried to find it again so I could report back. I was unsuccessful. I spent the weekend with an android owner who told me about swype. I find it a much quicker way of entering text. So, if you have an android phone, you might like to give it a try. Search for swype beta.
Published with Blogger-droid v1.6.7
Posted by Julie Stenning at 12:13 0 comments

Here she is - nearly finished. I want to add more white paint to the dress but can't do that for a bit because I am either away or have guests for the next 3 weekends. 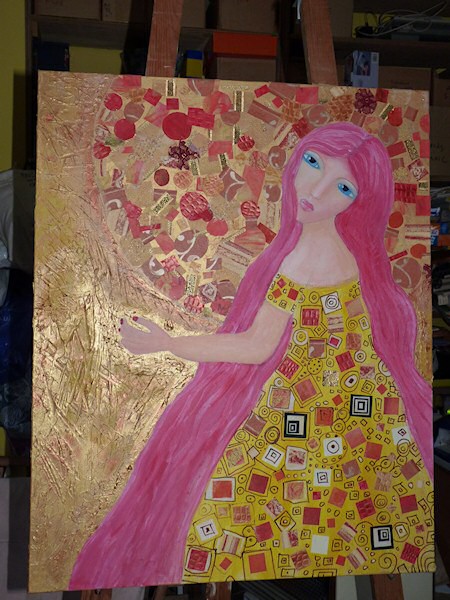 Posted by Julie Stenning at 21:38 0 comments

I'm taking Tammy's Magical Mythical Makings (M3) course. We do three pictures during the course. I am very behind and still only in the middle of the first! It is a Goddess in the style of Klimt. The course is closed now, but Tammy will be making it available on DVD shortly.

The picture is being painted on a 24 inch by 30 inch canvas. 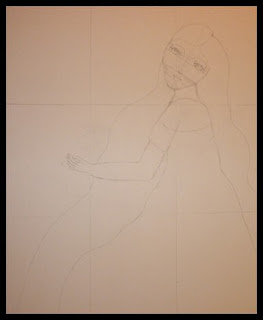 First layer of paint - the eyes are too small. 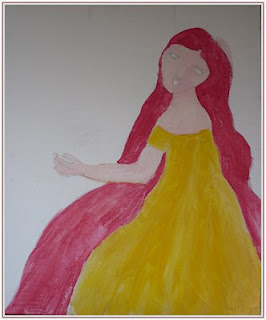 I had a problem sorting the eyes out. In the end, I drew one to my satisfaction, traced it and copied it to the other side. Even after all that, they weren't both the same size. Painting them afterwards was tricky as well. I found I could do it more easily if they were on a straight line, hence the position of the canvas. 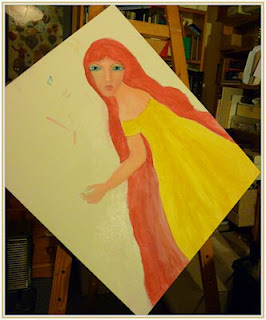 Here, her dress has been completed in the style of Klimt. 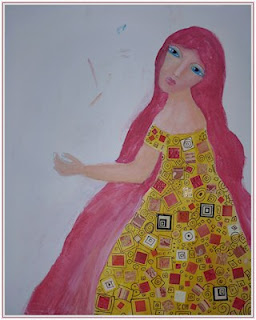 A gold background has been painted. I use Reeves paint, it is fabulously gold. 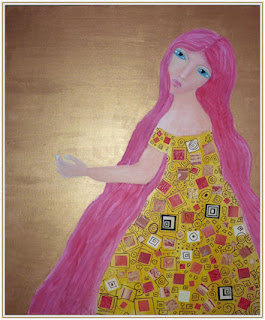 This is where she is now. I have to wait for the structure gel to dry before I can progress further. Tammy uses Texture gel. Even though my pot lid was so tight that I had to get DH to open it, it was still dry. I haven't been able to find out how to regenerate it. Luckily I had some structure gel which is much softer but still can be used to create peaks. 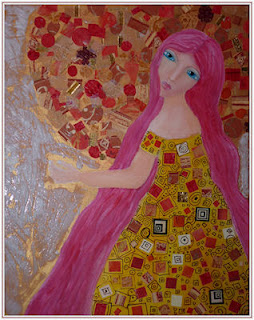 Posted by Julie Stenning at 21:09 1 comments