What a strange dream

I sat down at my laptop a few minutes ago and remembered a dream I had this week sometime. Picasa (a computer application which helps you file your pictures and also creates collages and does other wonderful things) had taken pictures of mine with either dolls or people (you know what dreams are like - you can't remember) and made them dance. I was excitedly telling a friend of mine. Now I have woken up, I don't think I was as excited as I should have been!

If you have any interpretations it would be fun to see them.
Posted by Julie Stenning at 08:50 0 comments

I belong to the Altered Books Europe Yahoo Group (ABEurope). We are currently doing a round robin, each with our own theme. Jacqueline's theme is "Truth, Secrets and Lies". I have been thinking about how to approach this and could only come up with "infidelity" and political lies such as weapons of mass destruction (or not) in Iraq and the existence of God. None of which I was comfortable exploring in somebody else's book. So, I googled for poetry. (One of my work colleagues reckons that Google is "Go Ogle" and I reckon he is right.) I found two poems that were possibilities, Secrets and Lies by Cleola and Secrets and Lies by Hannah Baukert (aged 11). I chose Hannah Baukert's poem. I browsed through some other poems on this page and was concerned that children of such a young age would have such insight. I am 50 now so may be wearing rose tinted spectacles, life became tough for me at aged 11, but I still did not feel as bad as some of these children. Selfish Pain by Leah Hamilton, My Secret by Nicola Churchman, Millie's Secret by Emily Wayne and My Big Secret by Tiffany are just a few that I find disturbing.

Any way, when I was in Sommerhausen with TJ and Carol, just last month (it feels like such an age away), I created a lino print. TJ is really into printing and has encouraged me to do so myself. We did a print in Jacqueline's book ready for when it came to me. TJ had it when we were in Sommerhause, it went on to Eileen and then I received it a week or so ago. This is the original print. 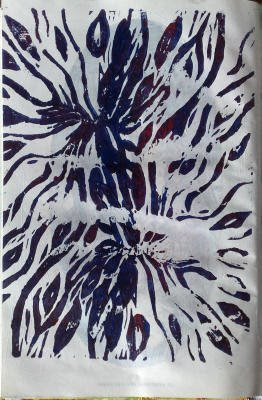 I have been doing an art journal course with Carol at the FiberPaperArts yahoo group. She encourages us to cover things (particularly text) with gesso and paint. So, I decided to do the same with this page, leaving a heart as the main motif. Hannah' s poem is about not breaking hearts by revealing secrets or telling lies. I chose a vibrant section of the print to retain for the heart. 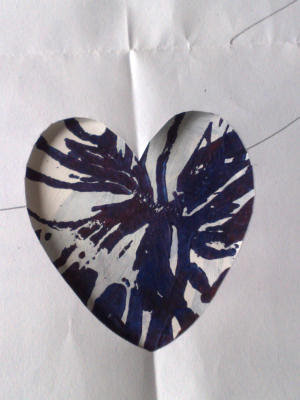 I glued a heart down using my xyron and repositionable glue and painted the page with gesso. I was surprised (because my memory is rubbish) to find that the ink "spread". It was a happy happenstance. The glued heart was then removed. I learned yesterday at a workshop how to make rubber stamps with funky or fab foam and created a couple of hearts which I stamped onto the page. I also found some bright red heart brads, which I painted purple and also a plastic heart frame. Finally, a padlock has been added because Hannah is locking other people's secrets away so they are not revealed. 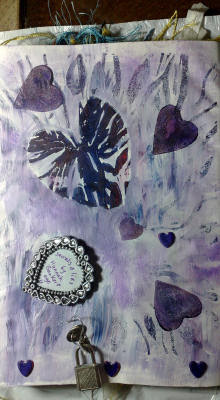 The right hand page was painted with purple paint and stamped with my newly made heart stamps. The poem was then written on it. The poem title has been painted, which is a positive move for me because in the past I have not been able to keep inside the lines when using a paint brush. I decided that there was too much space so used my favourite stencil of curlicues. 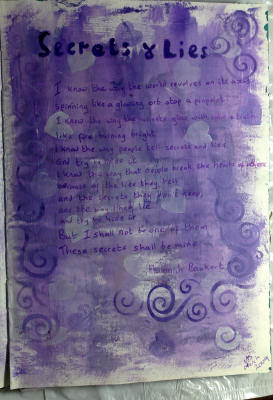 Posted by Julie Stenning at 20:16 1 comments

I think I should change the name of my blog to "The Workshop Addict". I have been to 2 this week. On Tuesday I went to a glass bead making course with "Ray the Bead". Ray is such a lovely person. He lives on a narrow boat and travels the canals of Britain, making beads. He has just extended his barge so he now has a workshop and a shop for selling beads.

I shan't be taking bead making up, I am too cack handed. You have to be able to twirl rods of glass and a metal mandrel in a flame, both at the same time. However, I did make one bead that is lovely, some of the rest are OK and most are terrible! Photos of my own beads will come later. These are what the group made. 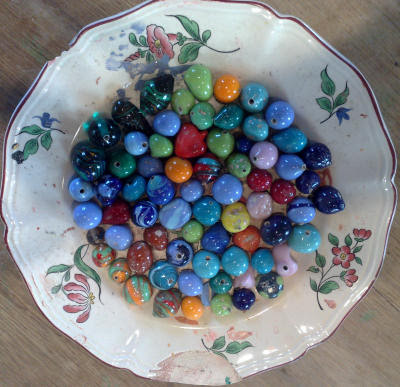 And ths is a close up of the plate. 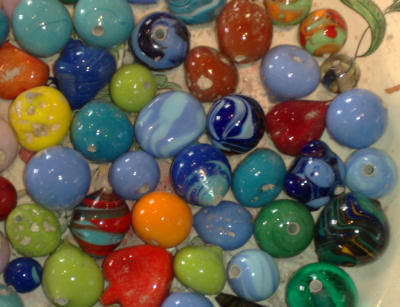 Posted by Julie Stenning at 19:51 0 comments

The idea this week was to choose an image reflecting the theme of the journal. I chose this photograph of a building in Barcelona, designed by Gaudi. I don't remember the name of the building, but I do know that the front is now a bank and there are lots of apartments behind. We were encouraged to paint the spread with a colour we don't like - Green does that for me. 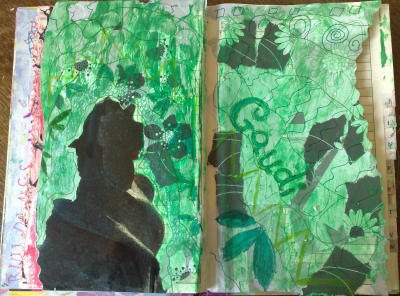 Posted by Julie Stenning at 19:16 0 comments 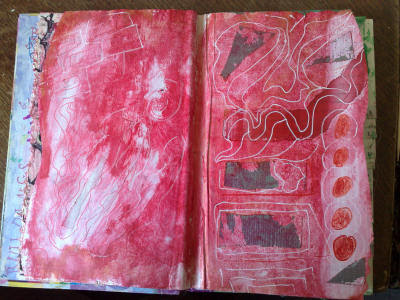 Posted by Julie Stenning at 19:01 0 comments

This week, Carol encouraged us to collect lots of images based around our theme. She had a list of criteria such circle, the letter A, something beautiful. My theme is buildings, and I have a box of images relating to buildings and landscapes, so I was able to raid it. This is what I did: 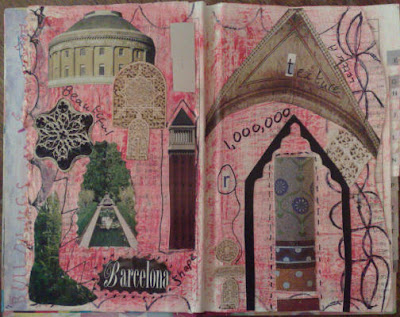 Posted by Julie Stenning at 18:57 0 comments I belong to fiberpaperarts at yahoo. It is a group of largely textile artists who are based in Neath in South Wales, but they do have members elsewhere. The group has a workshop each month. Carol, one of the members, is doing a weekly online art journal workshop. This week we prepared our book, chose our theme. We then did a "graffitti" page based on our them and also some sketches on the other page. 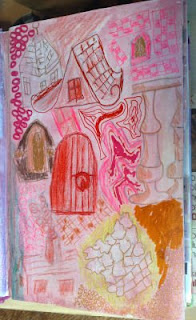 Posted by Julie Stenning at 17:25 0 comments 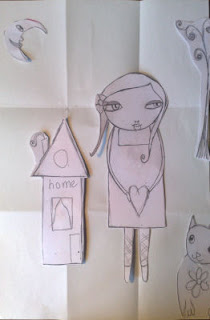 I'm doing an online workshop with Tammy at www.willowing.ning.com. The first lesson was about composition. The images in the photo are hers, I just placed them.

I was ruler and maths challenged when drawing lines 1/3 across the page, so I folded it into thirds!
Posted by Julie Stenning at 17:21 0 comments 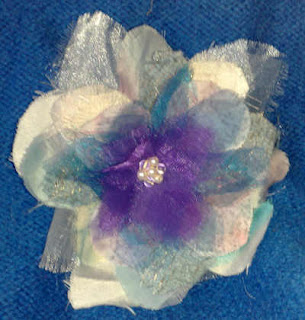 Yesterday was the monthly Mayhill Textiles group meeting. Jenni showed us how to make quick and easy brooches. I think I will put mine on a bag. If you are reading this, thanks Jenni.
Posted by Julie Stenning at 17:19 0 comments 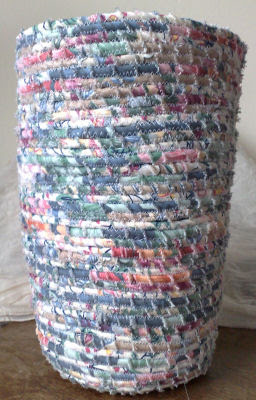 A couple of weekends ago, I went to a workshop at Mayhill textiles, run by one of our members, Jenni. We wrapped fabric around nylon washing line and then stitched it by machine to create bowls. My "bowl" is about 9 inches tall. We had a great time. I am making a shopping basket now. 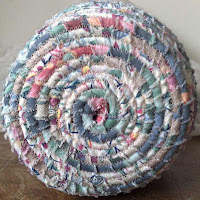 Posted by Julie Stenning at 16:54 0 comments