I'm taking part in a jigsaw puzzle swap at the moment. First of all I was going to paint a ballet dancer en pointe, with her long hair standing up and to the edge of the top of the puzzle piece. I drew one in my sketch book which wasn't too bad, but once it got on to the puzzle piece it was horrid.

I then thought I would use an image of a couple dancing, I had an image already to base it on. The idea was to have the female dancer's foot sticking up into the top of the puzzle piece. I had to abandon that idea because the proportions weren't right. If her foot was in the right place, his head was missing!

So, I went to my collage box and on top of it was a Twinings tea box. I wasn't able to use the original image because there are a couple of advertising pieces on it, and also some creases once I had cut it out, so I decided to paint one instead. It is a poor approximation, but if I hadn't fessed up to using an image for inspiration, you would never know! The shiny bits are stickers for decorating your finger nails which I bought from Claire's during the week. They are a great size for art work, I'll have to go and get some more.

This isn't a miracle of miniature painting, these pieces are about 5 inches square. 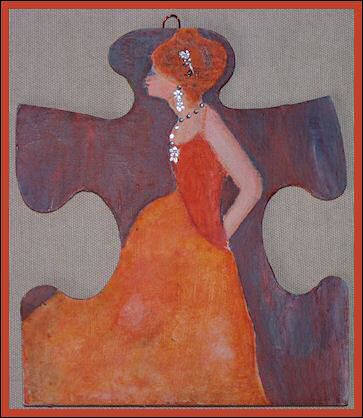 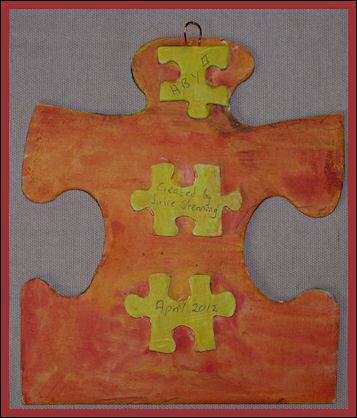